BILATERAL COCHLEAR IMPLANTS: Should I get one? 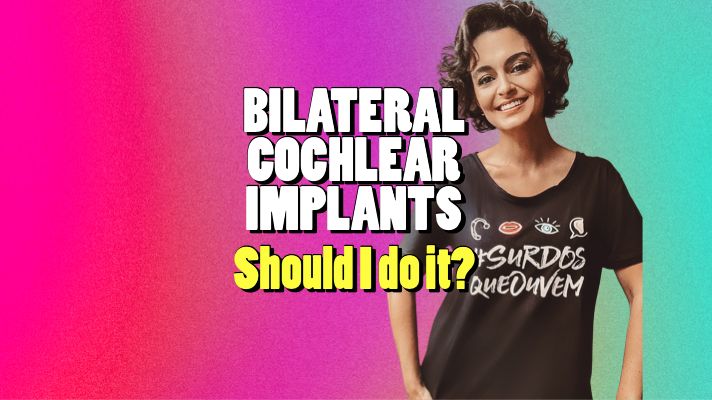 When I examined the possibility of applying for a cochlear implant in 2013, my doctor said yes, I would be a candidate for bilateral cochlear implants. At the time, I thought: “Whoa, not so fast, let’s do one implant at a time.” However, at the exact moment my first CI was activated, I looked at my friend and audiologist Michele Garcia, who was with me, and told her: “Yeah, you were totally right. I should have gotten both!”

Let me explain. Just like every other person with deep hearing loss in the face of the Earth, I feel a deep attachment to what little hearing I  think I have. Problem is, on that case, I couldn’t be more wrong. It was only after I got my cochlear implant that I understood I could not have considered I had any actual hearing, much less satisfactory hearing. I would tell everyone I was managing well and everything was fine. The worst part was that even I believed it. How can anyone who depends 100% on lip reading and gets home everyday cross-eyed and wrecked by the mental exhaustion brought about by deafness could feel “great”? Seriously.

When a person with deep hearing loss asks to talk to me, either at the SONORA clinic or by email or Facebook, usually what they have to say sounds just like me before 2013, when I got my CI: “I can hear everything. It’s just hard for me to understand. I need to do lip reading.” Or: “I’m fine the way I am, I can hear everything with my aids.” Yeah, you think you can hear… But you can’t.

I get it. I am aware that each and every one of us has their own time, but there’s no arguing against facts. Nobody is just fine or listening perfectly when they have hearing loss, even with the best hearing aids money can buy. This is a delusion. Nobody has to do a cochlear implant just because they can, but we must understand what deep hearing loss means in our lives.

In my life, it meant not understanding human speech, hearing noises and being aware that something was going on but not knowing what exactly, being very afraid of being in the dark (if you have deep hearing loss, you are both deaf and blind in the dark), facing various embarrassing and tiresome situations, depending on other people for various basic things like hearing the doorbell or solving any problem over the phone. In short, deep hearing loss only brought me problems, made me lose good opportunities, and isolated me from the world.

Saying “I’m fine, I can hear everything, I just don’t understand things very well” is a lie.

It was fear that prevented me from doing bilateral cochlear implants from the beginning. It was too new for me, and I was guided by the stories and experiences of other people. Everybody was afraid they would start hearing everyone sounding like Donald Duck.

Today, when I remember my thoughts in 2013 — “If I lose one ear, at least I have the other” — I laugh at myself. It was only after the CI that I understood none of my ears was good. If the implant did not work on one ear, there would be nothing the other ear could do for me.

You have to do what your heart tells you to, of course. My heart told me to contain myself because I was afraid and insecure. When I activated my first implant, even with that weird, low sound from the beginning, my brain realized it was vastly superior to the sound I had with the combination of deep hearing loss and hearing aids. I instantly regretted not having done both at the same time. It took me two years and a half to be brave enough to want to go through everything once again.

Actually, I’m still going through it: on the 16th I will complete two months having both implants. I’m still in the early stage of adaptation. I thought many times I could already have my left ear as good as my right one, fully understanding speech and sounds, listening at 5dB in some frequencies. But I will never know whether I would have gotten this result if I had decided I would do both in 2013. For now I have a baby in my left ear, who can hear and understand a lot without lip reading, but who’s still crawling in comparison with Usain Bolt on my right ear.

Be rational, not emotional

If you can, be more rational than emotional about your decision. Choosing just one is already hard. Choosing both is something else. If I can give any advice to anyone with deep bilateral hearing loss who is a candidate for cochlear implants, all I have to say is: do it! You don’t have anything else to lose, but you have a whole world of sounds to conquer if everything goes well.

Chances are in your favor: doctors are very selective about recommending this surgery! If I could go back in time, I would have done bilateral cochlear implants in 2013, no doubt about that. I LOST MY HEARING: what now?

This website uses cookies to improve your experience while you navigate through the website. Out of these, the cookies that are categorized as necessary are stored on your browser as they are essential for the working of basic functionalities of the website. We also use third-party cookies that help us analyze and understand how you use this website. These cookies will be stored in your browser only with your consent. You also have the option to opt-out of these cookies. But opting out of some of these cookies may affect your browsing experience.
Necessary Sempre ativado
Necessary cookies are absolutely essential for the website to function properly. These cookies ensure basic functionalities and security features of the website, anonymously.
Functional
Functional cookies help to perform certain functionalities like sharing the content of the website on social media platforms, collect feedbacks, and other third-party features.
Performance
Performance cookies are used to understand and analyze the key performance indexes of the website which helps in delivering a better user experience for the visitors.
Analytics
Analytical cookies are used to understand how visitors interact with the website. These cookies help provide information on metrics the number of visitors, bounce rate, traffic source, etc.
Advertisement
Advertisement cookies are used to provide visitors with relevant ads and marketing campaigns. These cookies track visitors across websites and collect information to provide customized ads.
Others
Other uncategorized cookies are those that are being analyzed and have not been classified into a category as yet.
SALVAR E ACEITAR
Copy Protected by Chetan's WP-Copyprotect.
Iniciar conversa
Clube dos Surdos Que Ouvem
Grupo SURDOS QUE OUVEM
Vá para versão mobile